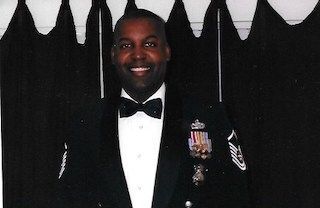 We would like to thank Ernest Gibson for his services in the U.S. Air Force. Ever since the age of ten, Ernie was fascinated by aircraft and that is when he began to study the military branches and realized he wanted to do something different. Ultimately, he decided to join the Air Force. He wanted to get out of his community, experience life, meet different people with different life experiences, and just travel the world, plus he would get his education paid for while doing the things he wanted to do. In January 1982 he decided to enlist in the Air Force, he was only 17 years old, but the Airforce let him enlist but not go into basic training until August 1982, when he then went to San Antonio, TX.

While in San Antonio, TX he was a Security Policeman which eventually changed to Security Forces. In that job he guarded high-value weapons and aircraft and protected high-profile people and facilities while performing various duties such as missile security and air base defense. From there he became the Elite Guard at his first base in Knob Noster, MO, and left after two years for a 3-year assignment in Washington DC protecting the President, who at the time was Ronald Reagan. He had a high-security clearance while on the Presidential Honor Guard and got to meet Presidents from all over the world which, ultimately led to his working for the direct Office of the Security of Defense at the Pentagon.

In 1987, he was sent to South Korea at the age of 23 where the primary mission was to constantly train for war in case North Korea broke the truce that had been established in 1953 after 3 years of fighting during the Korean War. During Ernie’s time there, the South Korean government was also preparing with extra training for all types of threats due to their selection to host the 1988 Olympics. Although he assisted in the Olympic security preparations, his one-year tour ended in July 1988 and Ernie left South Korea right before the Olympics began. The Olympics were a huge success for the country of South Korea and the world.

Next, Ernie was stationed at Malmstrom Air Force Base in Great Falls, MT where he spent almost 6 years as a Staff Sergeant. In March 1993 after being promoted to Technical Sergeant, he ended up back in San Antonio to be a Drill Instructor.  It was a very tense job with long hours and lots of training for the recruits since at that time the only place for Air Force basic training for the entire enlisted force was in San Antonio. Ernie completed his Drill Instructor duty and was sent to a radar site called EL Dorado Air Station near San Angelo, TX where shortly after his arrival, he learned the site was closing within months due to Congressional hearings. During the following weeks, he was offered a “base of preference”, and chose Nellis Air Force Base in Las Vegas, NV among only two choices due to his rank. The other choice was Ellsworth Air Force Base in Rapid City, SD. Ernie was stationed in Las Vegas for about 6 years and married his wife Jeri, whom he is currently still married to today. They have been married for 23 years and they have 4 young adult children.  In March 2003, Ernie retired from the Air Force with 21 years, and 9 months of honorable service.

In 2005, they moved to Gillette where he just wanted to be a normal person. In 2007 he started taking classes at Gillette College. In between college, he worked in the Adult Community Corrections Center as the Program Manager, and from there he went to K-Mart as the Assistant Store Manager & Loss Prevention Manager. Ernie also worked part-time at the Youth Emergency Services (Y.E.S. House), as a Youth Advocate and in 2008, joined the Campbell County Sheriff’s Office where he served 12 years, and 9 months in the law enforcement field. Throughout those years, he was a Detention Officer, Patrol Deputy, DARE Officer, and School Resource Officer.  In March 2021 Ernie retired from the Campbell County Sheriff’s Office and is currently taking classes to receive his Human Services Certificate. Although he has vast amounts of life experience, he is really interested in continuing to learn, sharing his experiences with others, and enjoying the knowledge and relationships that come with attending college.

Today, Ernie is enjoying his retirement, taking college classes, and loves being part of any of the Veteran’s programs the community has to offer. He states, “I really want to help veterans,” and he loves to be an inspirational/informal leader for the Veterans. Ernie loves doing activities with his family, which also includes family gatherings all over different states, loves to travel, likes to intake audiobooks, rides his electric bike with his wife, and enjoys his dogs because he is a “big kid” at heart.

Ernie would like to add his favorite quote by John Wayne, who was one of his favorite childhood actors. “Talk low, talk slow, and don’t say too much.” He has added that quote into his life interpretation to mean, just listen and be helpful, slow down, and enjoy life, and your family because “Time is too short.”

Thank you so much, Ernest! The Gillette College Foundation is proud to recognize you as a Veteran!

Return To List
This form needs Javascript to display, which your browser doesn't support. Sign up here instead
Close